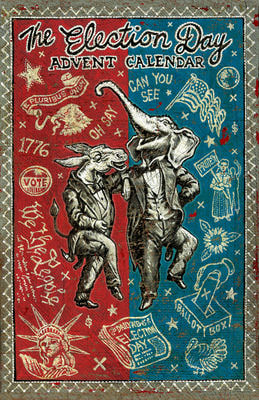 My friend Ben Helphand and I started scheming in 2005 on a way to celebrate the right to vote. We believed that a great nation deserves great civic rituals, and the election season was the natural time for such a ritual. What we came up with was the Election Day Advent Calendar for 2006. The idea was simple: inspired by the traditional Advent calendar for Christmas, our calendar let you open a door a day through Election Day, and reveal interesting facts and quotes about our democracy and the history of voting. It would be non-partisan but not scrubbed of parties, a reflection on the many events and people that comprise the story of the franchise.

We wanted to make a real calendar that you could buy and hang up. Neither of us had any experience in the print production world, and we both had day jobs in different fields. We had to figure out all the steps of the process, from hiring an artist to forming an LLC to sales and shipping and marketing. We put up our own money to fund it, and hoped to sell enough just to break even.

The response to that first Calendar was strong, and told us there was a desire for such products that let us all celebrate the shared history of American politics. People were delighted by the concept; when they saw it, they got it. We heard from teachers that it made a great part of their back-to-school civics lesson plans, and from many people who said they gave it out as a gift to a politics-nerd friend or colleague.

After repeating the process in 2008, we took a break in 2010 but didn’t give up on the core idea. What we needed, though, was a different approach to paying for production—it was just too risky to put up our own money time and again. In the meantime, along came Kickstarter. It’s perfect for a project like ours.

As I write, there are 6 days remaining in our campaign, and we’re a little more than half way to our goal. If you’re reading these words and like what I’ve described, please support our Kickstarter.

Our motto with Gerrymander, the small company Ben and I founded for the Calendar, is “Make Small Plans”. It’s a gently mocking riff on Daniel Burnham’s famous and possibly apocryphal quote. Our republic, as great and large as it is, is still composed of the small democratic actions of all of us, and those things require care and feeding, and they ask to be done well. If the Election Day Advent Calendar provides civic nourishment in any way, then it will have been a success.