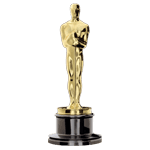 For the past n years, I’ve built and hosted a web app that lets my film buff friends and me compete by guessing who will win the Academy Awards by voting for nominees in each category. I do a new one from scratch each time. It’s a fun diversion, but it’s also a playground for me to try out new skills picked up in the past year or new tools or techniques I’ve been wanting to fool around with.

The first thing I need to do each time is get a list of that year’s nominees in some machine-readable format. Being a lazy programmer, I’m not going to type in the 100+ nominees into a spreadsheet or text file, so I wind up writing a short throwaway script to coax some list I’ve found online into the form I need for importing. This sort of script is the meat-and-potatoes of the workaday programmer, the ones you whip up in a few minutes as an intermediate step in a larger task. Ordinarily, they’re hardly worth commenting on. They have a vanishingly short half-life, since there is rarely any generality to be derived from them: they only work on the exact input given.

This year, I wanted to try out a new way of getting the nominee list together. Sure, for a small task like this, there’s no compelling reason not to go with the same kind of quick throwaway script as before. But again, the point of the Oscars app is to exercise new or different muscles.

My goal was to generate a representation of the list of nominees in a format such as CSV suitable for importing into a database. I found a source list of nominees, formatted as follows: the name of the category is on the first line, then a list of nominees comes next, each requiring two lines, one being the name of the film and the other a name or list of names associated with the nomination, all followed by a blank line, then the subsequent category starts on the next line and we repeat. I wanted to read in and parse text formatted like this:

And convert it to this:

Normally, to scan and parse this type of input, I would write a program to loop over each line of the input, with a number of global state variables, keeping track of what tokens I was currently processing. In this case, I might have global state variables indicating whether I was currently processing a category and what the current film is, and I would have a set of if/elif/else statements for tests of various combinations of those variables, including for the contents of the current line (a blank line or EOF indicating the end of a category).

Each time through the loop, then, we get a line from the text and check to see what state we’re in. While this approach is easy to get started with, it leads to fragile code and requires a lot of mental bookkeeping. Worse, each time through the loop, the state of where we are and what we just did is forgotten. That accounts for the proliferation of state variables to be checked in order to restore the state of the processing. Think about it, we are marching sequentially through this text, wouldn't it be nice if we could just pick up where we left off with the last action?

My approach this time is inspired by Rob Pike’s talk on lexical scanning. Instead of a loop where we get the next bit of text to examine and restore the state of the processing by examing a number of state variables, we instead have a loop where a function is called that returns the next function to be called. In other words, a function is called which does a bit of processing of the text, advancing the pointer or consuming from a stream, maybe emitting some tokens, and then returns to the caller the function that should proceed from where the returning function just left off. For instance, we just scanned a category, which means we know we are ready to scan a film, so call the film scan function. That next function can just carry on its processing without any state-checking preliminaries. The loop of our system therefore is very concise, just calling functions and getting the next one to call the subsequent time around. Roughly:

When we are done processing input, say, EOF is reached, the state function currently executing can return None to the caller, which will end the while loop and shut down the machine.

The advantage to the programmer is that instead of building up a complicated switch of control to determine what state our machine is in, we simply write functions that proceed naturally from the last state, and then hand off control to the subsequent function. It’s clean and helps keep the complexity of the system manageable. Any time you can reduce the number of control flow statements and replace them with simple functions is a win in my book.

So back to the Oscars. This year, I opened the official nominee list from the Academy’s site, a PDF. I selected the text, copied and pasted it into a text document. The only manual editing I did was to add a blank line between each group of nominees by category, and I also joined lines in categories like Music (Original Song) where the title of the song and the name of the composer is split across multiple lines—these were quick changes that simplified the scanning logic.

There are three state functions in my program, one for each of category, film, and name (or list of names):

(title() handles some odd case formatting in the source text by converting strings to title case.)

lex_film is the most complex, having to handle the possibilities of a blank line, meaning we’re moving on to the next category, EOF, which shuts down scanning, and the film itself. But in all cases we merely return the next state function to called (or None).

Admittedly, this is more sophistication than normally appears in my yearly nominee list parsing. But I have to say that I was able to write the program in about the same amount of time, found it ran correctly the first time, and was actually kind of fun to do. And while this was a silly example, you can start to see the power you can get from this approach when lexing different kinds of input with more and more complex tokens. When you lift the flow of control up a level and let your functions focus on the task at hand, the result I think is a more elegant and more obviously correct program.

The script and input text are here, and the output list of nominees is here.