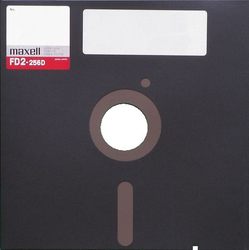 This post by Dave Winer is an example of an observation I’ve seen made recently, which roughly goes, kids today, they didn’t grow up with ringing-bell, handset-style telephones, or floppy disks, to name two obsolete technologies, and so our icons for “call” and “save” in our software don’t mean anything to them, because they don’t know what those icons stand for (and by extension, what action is expected to happen when you click on them). I think this overstates things. We should always strive for better, more universally-understood metaphors in our graphical interfaces, to make software easier to use and more accessible. The idea that future kids won’t know about technologies that had their heyday prior to their consciousness is belied by the fact that I know about things before 1977, stuff like kerosene lamps, telegraphs, and muskets.

Let’s set aside the fact that abstract graphical representations of physical things, icons, tend to take on lives of their own, semantic meanings that diverge from their real-world analogues (think folders, files, and the desktop), so we don’t need to fully understand or even be aware of the physical object to successfully use the virtual one. (It’s not as if we had in-born knowledge of telephones and floppy disks, and similarly we have to learn about software and its metaphors in their own context.) In part because there is uneven deployment and obsolescence of technology, in part because of cultural memory like movies, and in part because of software and the Internet, we will remember, and especially we will remember technologies that overlap, in function or metaphor, and which are relevant to our contemporary technology stories.