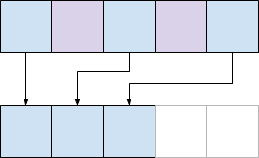 Update: See a better way of doing this below.

I'll often have a slice that I want to filter down on, removing elements based on some test, and I would prefer to modify the slice in-place for whatever reason, either because I want to retain the reference to the original slice or I don't want to allocate a new slice as destination for the desired values.

Here's a straightforward way to accomplish it. The idea is that, when you encounter an element you want to remove from the slice, take the beginning portion of the slice that has values that have passed the test up to that point, and remaining portion of the slice, i.e., after that element to the end, and copy them over the original slice. Then, assign a slice expression up to the number of values that passed the test to the original variable.

Here's an example. Let's say I have a slice of integers, and I only want to retain the even ones.

The i variable is used to keep track of the number of even values found in the slice. When an element is odd, we create a temporary slice using append and two slice expressions on the original slice, skipping over the current element. The temporary smaller slice is copied over the existing, shifting down the remaining values. The l variable makes sure we make the right number of comparisons despite moving things around. It's important to note the memory location of the original slice is unchanged with the copy. No new heap allocations are performed, even with the temporary slice.

Update: A number of people, including here in comments and on the golang reddit, have pointed out that the method I outline here is pretty inefficient; it's doing a lot of extra work, due to the way I'm using append. A much better way to go about it is the following, which also happens to have already been pointed out in the official Go wiki:

This also has the benefit of being simpler and shorter. Use it instead!