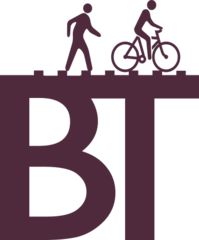 There was a moment last Friday while I was on top of the soon-to-open Bloomingdale Trail with a tour group when I had a strange feeling. We had been walking for more than a mile to that point, 17 feet up above Chicago streets, passing houses, factories, and alleyways in Logan Square. I paused to consider the feeling, and I realized it was that I had been walking continuously for half an hour through a Chicago neighborhood and not once had to contend with an intersection or motor vehicle in all that time. Unless you live in the city and walk or bike often, it's hard to convey how pleasantly odd that feeling was. It's not something you can get from a typical park or trail. Parks are usually compact open spaces, polygons boxed in by streets. Most other trails are at grade level, so whatever flow or momentum you build up is periodically interrupted by an intersection. The Bloomingdale Trail, however, is both apart from and woven through the neighborhoods it is situated in. If you go the length from the west trailhead to the east trailhead or vice versa, you'll have travelled 2.7 miles -- a massive span across 4 Chicago neighborhoods -- in an entirely human-mediated fashion. And yet you never feel as though you've taken yourself out of the fabric of the city, as you might when going into a park. Thanks to periodically spaced adjacent parks and access ramps, you can dip in and out of the Trail as casually or deliberately as you choose. You gain both a new vista on the city, and a deeper connection to the neighborhoods you've always known. It's remarkable what a mere 17 feet of elevation can do to both take you out of the city and give you greater access to it.

It is this embeddedness that I believe will ultimately make The Bloomingdale Trail and the entire 606 system of parks a success. It's not a jewel, a thing to be admired, with its aesthetics upfront. It's a relentessly practical bit of new human-scale infrastructure in a vibrant residential area. It will materially improve the lives of its neighbors each day by enabling them to be active, to commute, to play, and to discover in a new and unique way. It's worth remembering that the project was funded largely by federal transportation dollars, earmarked for reducing traffic congestion and air pollution. People will wonder what this thing is, and the answer will be in its daily use. 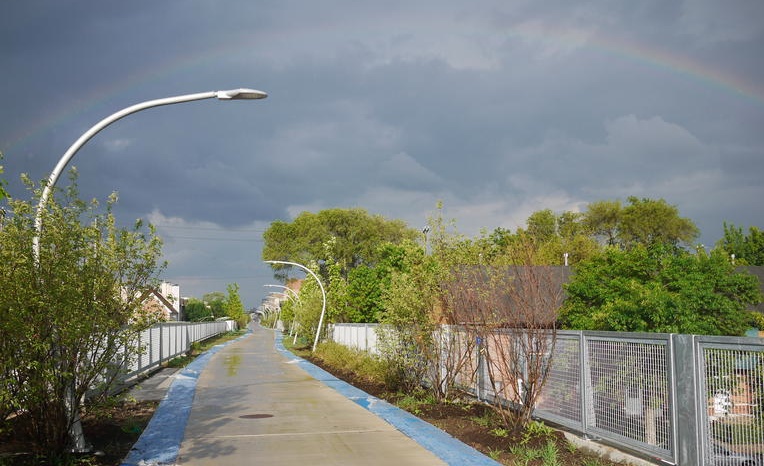 I remember walking around the old Bloomingdale Line, a disused elevated railroad embankment, in 2002 with a group of work colleagues. We would sometimes take our lunch up top, ducking under a fence at Milwaukee and Leavitt to gain access. The germ of the Friends of the Bloomingdale Trail was planted there; the non-profit community organization officially formed a year later. The circumstances at the time were fortunate: the development of the High Line in New York provided a template and a healthy competitive jolt; the railroad company was looking to rid themselves of their responsibilities to the line; the City wanted to tear down the embankment and spanning viaducts, providing further impetus; and crucially, the rights-of-way were all contiguous and owned by the City: there need be no time-consuming negotiating with private owners to acquire the trail's property, as there was in New York. From there we held community meetings, trash pick-up days, festivals, goofy but earnest Valentine's Day events, led tours, pitched aldermen and city planners, documented the Trail as it existed, helped open a new neighborhood park next to the Trail, printed posters and brochures, hosted arts events, let David Schalliol do his magic, connected with open space plans, and started a partnership with the Trust for Public Land and the City of Chicago to design and build the Trail. In 2007 and 2008, we convened neighbors in a series of meetings and surveys to listen to, capture, and synthesize the community's vision for the project. The product of this effort, the Community Visioning Update, was perhaps our most important practical work as an organization: this document was incorporated into the City's official request for proposals for design and construction. To the best of our ability, we made sure the future Trail would be reflective of the community it came from and would serve. 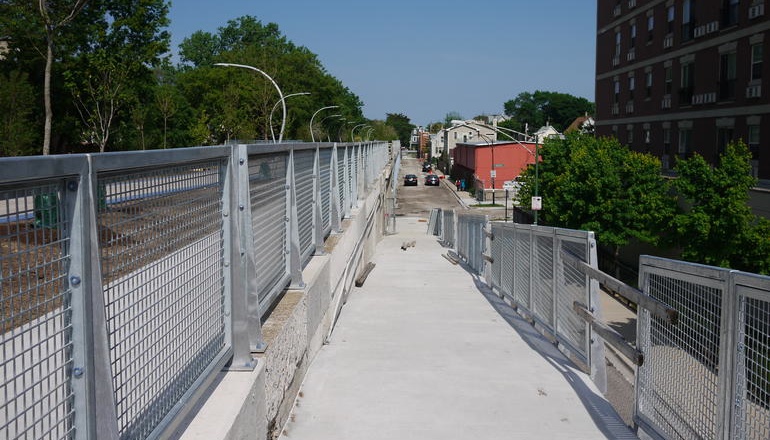 It's time now to celebrate the opening of the Trail and begin a new phase in the life of FBT. The original goals of the organization were to:

Our new mission is to be the community stewards of the Trail, and to that end, we recently applied and have been approved to be a Chicago Park District Advisory Council, or PAC. As befits our unusual new park, we're breaking new ground as a PAC. We're unique in that our bylaws state there will be board representation from each of the 4 neighborhoods, and from each of the constituent park PACs (Julia de Burgos, Walsh, Churchill Field, and Kimball). Because no other park covers as much ground, cuts through as many neighborhoods, and links up as many adjacent smaller parks, governance and community orginizing around The Bloomingdale Trail will be a new experiment for all involved.

One last thought. There are very few good west-east routes in Chicago: most transporation infrastructure radiates from and to the Loop. The Bloomingdale Trail is a stroke across the spokes, and the physical, economic, and cultural circulation it promotes will be fascinating to watch. But there are bigger things at stake. Even before this new park was built, the Trail conspicuously ended at the north branch of the Chicago River. (Now it ends at Ashland, that street's bridge having been born-again over Western.) It's always been a dream and a goal of FBT and the 606 partners to extend the Trail across the river in a future phase. From there, on-street bicycle paths can be knit together, ultimately arriving at the lakefront. However, there's an even bigger dream to be dreamt. A few miles west of the western terminus of the Trail, the Illinois Prarie Path has its eastern endpoint. The IPP carries you out due west 60 miles past the outer suburbs. A network of rural trails beyond can be followed all the way to Iowa. So while we celebrate the opening of Chicago's next great park tomorrow, the notion of a bicycle trip that begins at the Mississippi River and ends at Lake Michigan, on bike paths the entire span, should stay in the back of our minds as a not-too-distant possibility.

Look up! It's The Bloomingdale Trail 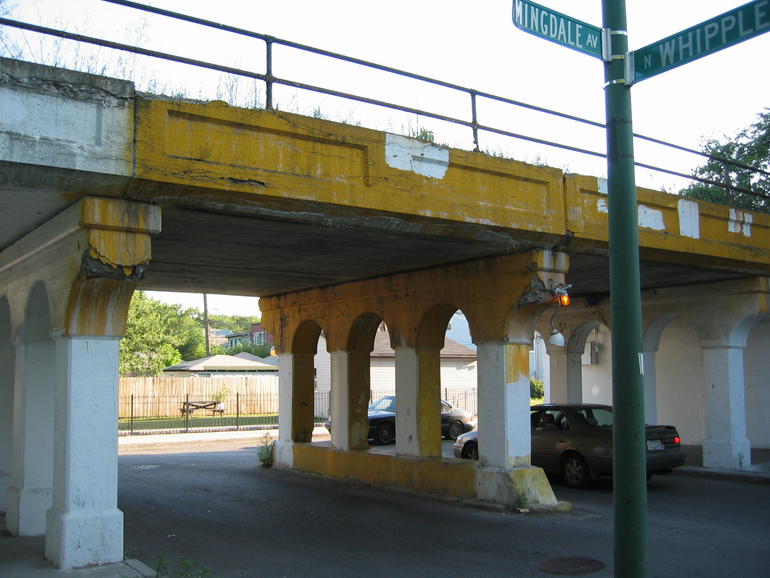 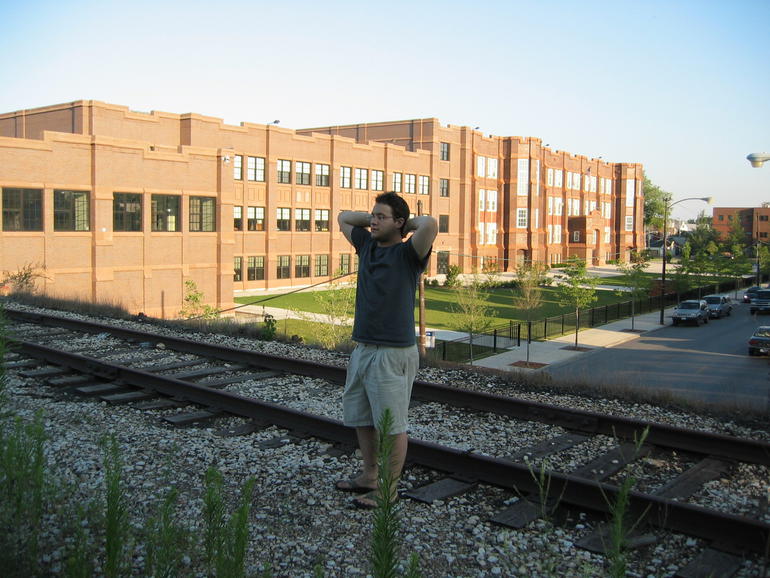 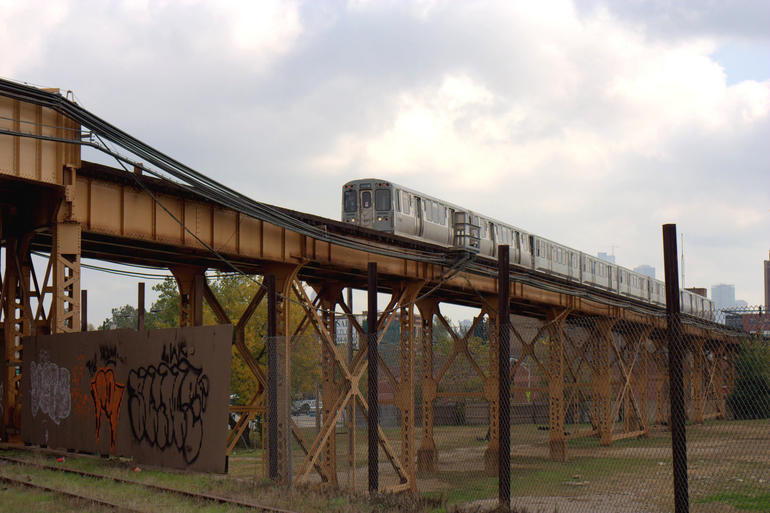 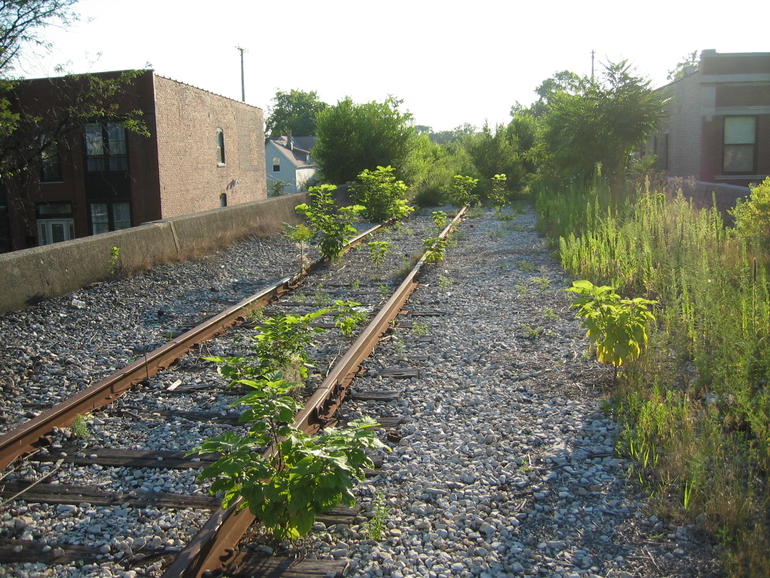