I said “smell you later” to some printed t-shirts in my possession today. 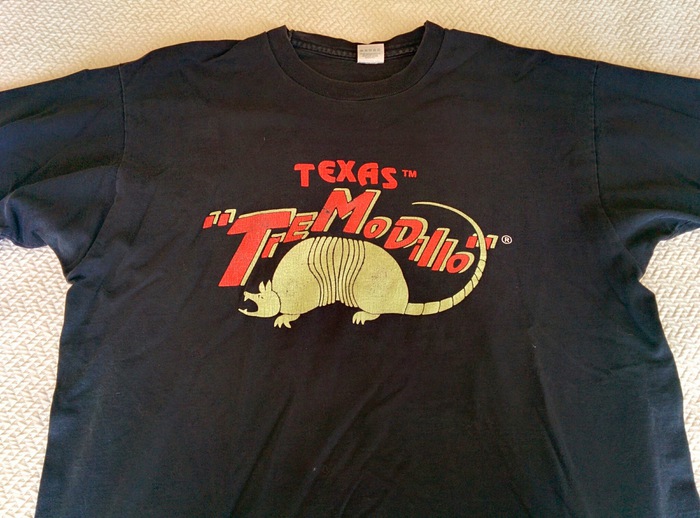 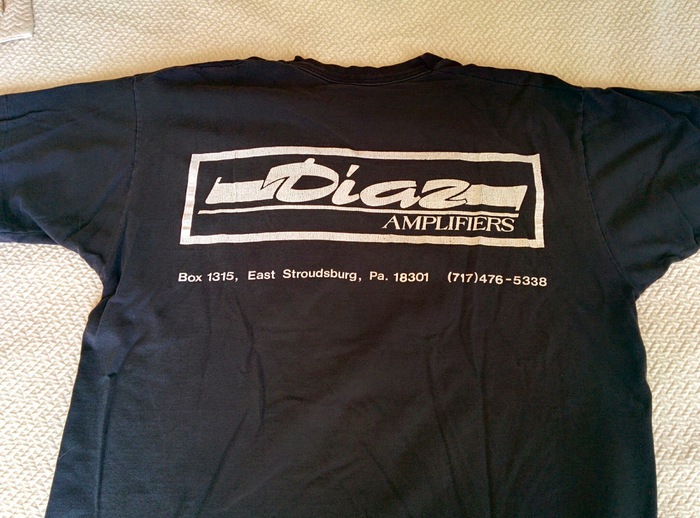 I stopped attending college after my freshman year, in part to go be the guitar tech for a band. This was 1996. Some friends of mine from high school had formed it, and a major label had signed them to produce a record. The band had me spend a week with César Díaz at his home and workshop in Pennsylvania. César had been the tech for guitarists like Stevie Ray Vaughn and Eric Clapton. Vaughn was, I think, César’s idol. He was a guitar player himself, and even had his guitar set up like Stevie’s, with heavy strings and high action. César had stopped touring, and made guitar amps and effects pedals instead. He also would teach new guitar techs the secrets of the profession. The Texas Tremodillo was one of two pedals he made. It had a tremolo effect, which is like a fast, regular wobble. We would spend the day in his workshop, tinkering on an amp that had blown a capacitor, or on a pedal that was buzzing. He was soft-spoken, reserved, and didn’t have a lot of patience for others. At night we’d get dinner at a local Indian place, or eat with his wife, whom I remember being kind, and their young son. One day we drove in to New York, somewhere in the Lower East Side or Village, to peck around at a used guitar show in an auditorium. We ran into Jimmy Vivino outside. He was wearing a pork pie hat and we walked around with him, looking at guitars—they were close friends. Later that night, Vivino and a bunch of other guys showed up at César’s workshop to jam. They played “The Weight” and many other classic rock songs. César soloed on an Stevie Ray Vaughn song. César was kind to me in the end. He wasn’t too annoyed when I would later call him to ask what to do about a failing pickup, or if I could use these tubes instead of those in this amp. I stopped working for the band after a year or so, and forgot about César, except when I would see the Tremodillo shirt in my closet. I rarely wore it—it was too big, and I felt like I should preserve it somehow, which I never made an attempt to do. Sometime later I read that he died in the early 2000s. He had been sick with liver failure not long after I visited him. At one point he had a transplant, but he only lived another couple of years. RIP, César. 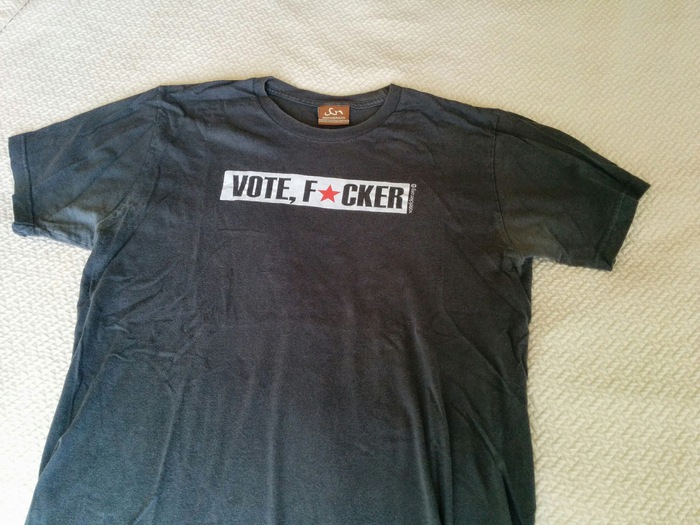 This is a shirt Ben Helphand gave me after a trip he took to Oregon. This would have been around 2004. The Bus Project had made the shirt. Ben and I became friends after we went to Minnesota in 2002, volunteering on the senate campaign of the late Paul Wellstone. After that, we would scheme up ways to try to improve small-d democratic participation. The Bus Project was a big part of the inspiration that led to the creation of the Election Day Advent Calendar in 2006. I’ll miss the Vote, F*cker shirt but many washes rendered it too shrunken and I looked like a sausage in it. 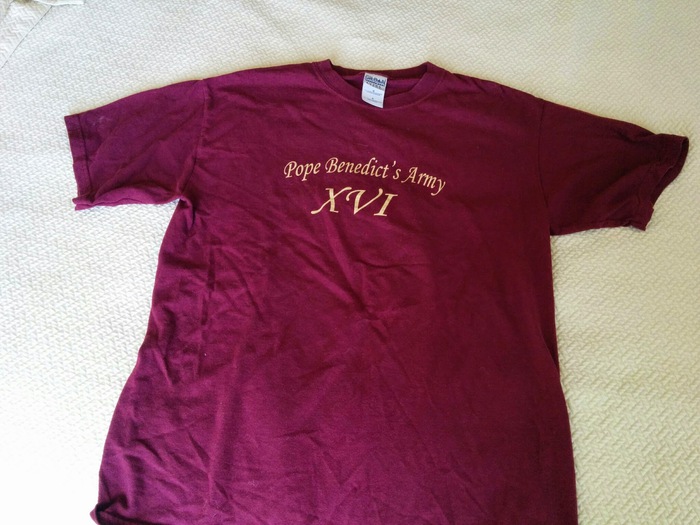 In 2005, I played on a co-ed softball team with my then-girlfriend, now-wife Michelle. We had been dating for a few months, and exploring a new group of friends in common together, some of whom were on the team. A conclave had elected Joseph Ratzinger pope on April 19. Three weeks later, the team organizer, John Pick, wrote the potential players an email:

I pulled the trigger on the league and put it on my credit card.

IIRC, we did not do the pontiff proud. I think we might have won one game?

Molly Sircher, who was our ringer, conceived and produced the shirt. She had played softball at DePaul, and was by far the best player on our team. I wanted to hang on to the shirt, but the shape was a little boxy, and it had a musty smell it picked up probably during that summer and never got rid of. 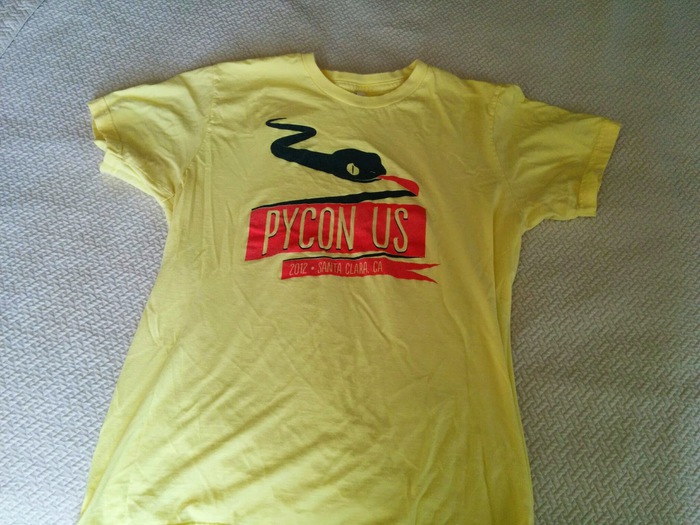 In 2012, I gave a talk at PyCon for the first and so far only time. The U.S. conference was in Santa Clara, CA, near San Jose. At the time, I was the deputy director of technology at the DNC. I was eager to attend tech conferences during my tenure there, to try to recruit software engineers to work with me on the campaign. This trip was a bust on that score, and I felt afterwards that my presentation had been lackluster. In retrospect, it was a stressed time. I felt like we didn’t have enough engineering help at the DNC to get through the campaign, and that it was difficult to attract any. I always liked Idan Gazit’s official PyCon snake logo that year and thought it was a handsome shirt. But it’s too small now, into the donation pile you go.